As there’s so little we can do at the moment I thought I’d brush off this account of a trip across Scotland in 2016 that I never got round to completing.

We took our bikes on the Caledonian Sleeper to Fort William, cycled across the Cairngorms and came home on the sleeper from Aberdeen. Here’s the story:

Sleeper from Crewe to Fort William. Note that if you take this train with bikes you are likely to have to get up at 03:30 in Edinburgh and move them from one coach to another, because the train splits and the bike carriage for Ft William only joins the train then. Our host was able to squeeze the bikes into an empty compartment but it was quite a palaver getting them in and out. (This may have changed now that the new trains are in service)

It was great to wake up in the highlands with snow-covered mountains all around.

However, by the time we got to Fort William the snow had retreated to the mountain tops. We followed the bike route (NCN78) to Inverlochy Castle,  took an unecessary detour around Corpach, then on the well-laid cycle track alongside the Caledonian canal. Came off at Garelochead, saving the rest of the route to Inverness (now fully open – the Scots have been busy) and over to Spean Bridge to stay at the excellent Spean Lodge with dinner at Russell’s – an expensive evening.

Next day following an aborted attempt to follow a back road, on to the A86 over to Newtonmoor. Not too much traffic on this road and gentle climbing, stopping at Strath Mashie  Wildlife reserve and Achduchil getting onto NCR7 just outside the town. at Newtonmoor we stayed at  (? B&B) and ate at (? Restaurant) Good beer at the Glen.
Next day continuing along 7, on good off-road paths and forest roads to Boat of Garten (just one poor bit at Coylumbridge  Just outside Aviemore with busy traffic. )
Took the Speyside railway to Aviemore and cycled back on the off-road over moorland – a great easy route.

Monday from BoG via the Osprey centre – the nesting pair are incubating eggs, everyone’s on tenterhooks hoping for a successful delivery – then over the hills to Tomintoul. Our first impression was that this is a town that doesn’t really know what to do with itself – great walking and cycling and there’s the whiskey tour but nothing to really entice you to the place. One feels that dead hand of the Crown Estate.
But by Tuesday  we had warmed to Tomintoul – our hosts were very hospitable. We toured Glenlivet and enjoyed the wee dram, got hailed on along the road, picnicked at the Bridge of Avon and finished off with a damn fine Pizza at Gordon’s. The Crown had certainly furnished the area with lots of picnic sites and walking and cycling trails.

Wednesday was a hard day. We could see at breakfast that the clouds were heading in the wrong direction and predictions of 20mph winds with 40 mph gusts turned out to be true. We started out well but as we headed up the hill towards Lecht the going got harder and we were soon off the bikes, pushing hard against a punishing wind. By the time we got to the ski centre we were desperate for transport to Ballater to get us out of a dangerous situation but none was available so we just had to carry on walking even down the hill.

The total lack of any cover meant that we were hanging on to the bikes as we descended and it didn’t get any better as we passed Cockbridge and into Strathdon. There were short sections we could ride but then we had turned into the next pass which was just as bad. Finally the road turned and we enjoyed  the last 6 miles or so into Ballater. I reckon we had walked about 10 of the 27 or so miles we travelled that day. Walking with a bike in a blasting head and a side wind isn’t the most ergonomic thing you can do so our backs and shoulders really took the strain – it’s going to take a fair bit of back massage and yoga to sort that out. This being the 5th day of the very merry month of May, you can imagine what it’s like earlier on in the year. The last 6 miles however were bliss – the road changed direction and we were blown down the valley.
We stayed at the Deen Hotel in Ballater – not somewhere I’ll be rushing back to. A noisy pump somewhere in the innards of the building ensured a restless nights sleep. Luckily the Alexandra Hotel had furnished us with an excellent fish and chip supper with pints of  Cairngorms Trade Winds beer that had also sustained on previous nights.
Thursday. Forcing down yet another overblown hotel breakfast, we took to the Deeside trail which was to be our route down to the bright lights of Aberdeen. Ballater had suffered from floods over the winter and I feared that the trail, the former Deeside railway that brought Queen Victoria up to Balmoral back in the day, would be rough going, but it had fared reasonably well with some emergency repairs. The worst problem we encountered was some dustbowl conditions where a farmer had ploughed his land when it wasn’t ready for it and the topsoil was blowing away. Having said that the surface wasn’t very good for much of the trail – as we were heading down the valley with the wind behind it didn’t really affect us but if we had been heading in the opposite direction we might well have taken to the roads, which weren’t that busy. 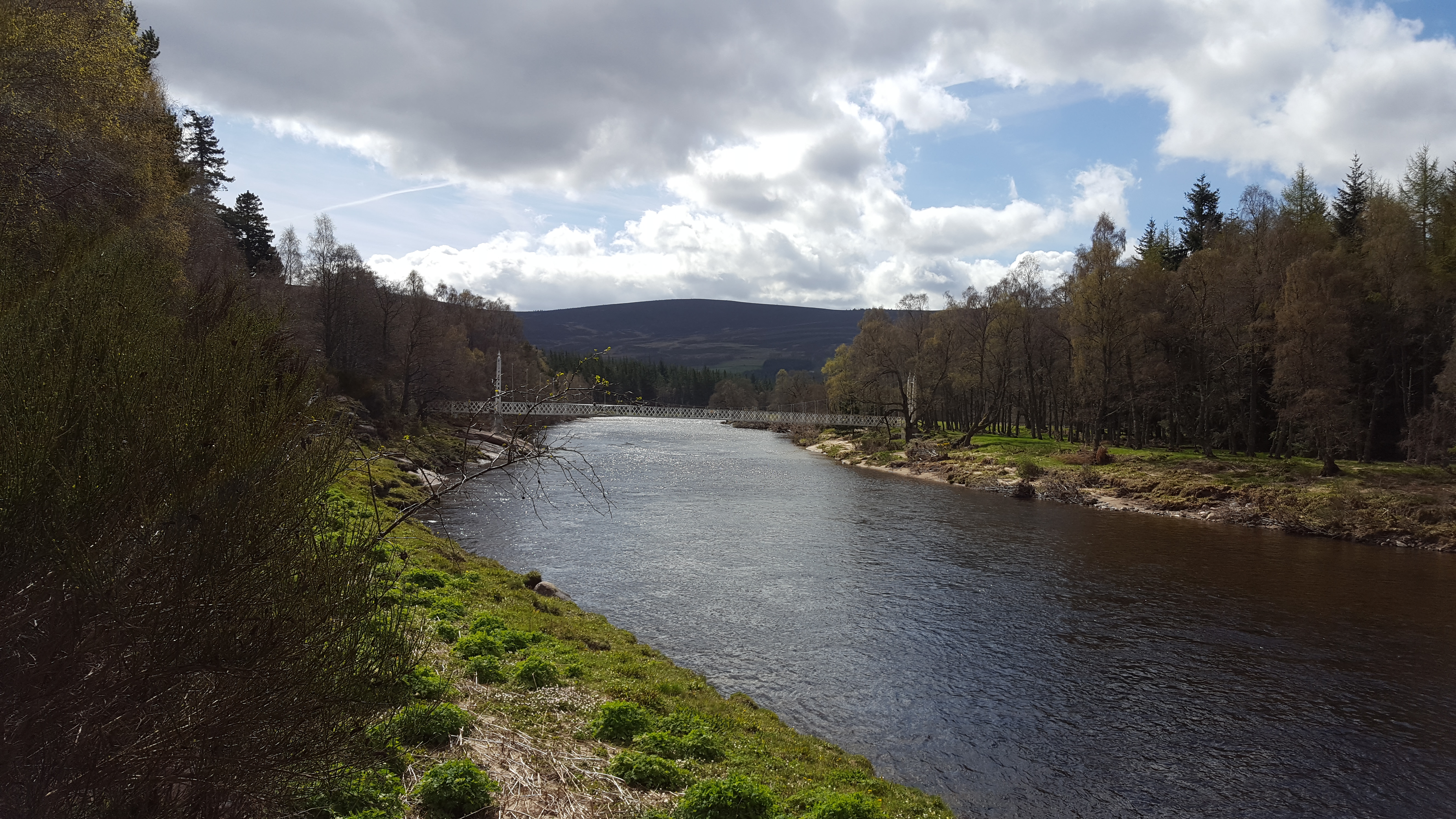 We took to the road between Aboyne and Banchory. Once we reached Peterculter though, we had a good quality surface all the way into the city centre, where Google Maps took over and directed us to friendly Skeyne House, our City Centre apartment. Good beer and food awaits us at the Grill, Fusion and Under the Hammer. and then we repaired to the apart hotel to await the election results.
On Friday we had a walk around town, had a great lunch at the Adelphi Grill, strolled up the coast to the River Don estuary and back via Old Aberdeen and the University, stopping in at the busy St Machar for a pint, followed by great Tapas at Nargiles and a final beer at Aitchie’s Ale House before boarding the Sleeper. They had “lost” the 2nd class coach – careless of them – so we had to sleep in first class, shame. Even getting turfed off at Crewe at 5:30 the next morning didn’t seem so bad.