This a new page (Jan 2019) collecting info about taking your bike on the bus in the Sheffield area.

Hulley’s of Baslow however do take bikes. We recommend contacting them to check on your particular journey:- T: 01246 582246 E: office2008@hulleys-of-baslow.co.uk Tw: @hulleysofbaslow 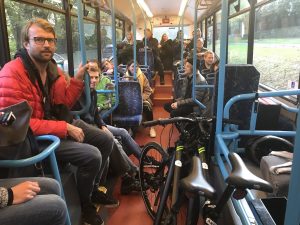 In this respect we are way behind the USA.

3) X70 is the only service I’ve heard regular reports of informal carriage – Coastliner would be very useful though. Elsewhere the 599 (every 20 min in summer) open top service along A591 by Windermere carries bikes on lower deck, & Scottish Citylink is preparing to deliver some useful changes for cyclists with their new app & booking systems – especially useful are the 976 Glasgow-Oban (when the 08.21 train is fully booked catch 08.30 coach) the 915 (Glasgow-Uig) and the 961 (Ullapool-Inverness) basically avoiding some big hills & less pleasant roads from key ferry crossings.

5) A real bargain is the Peak Wayfarer unlimited rail & bus (& tram?) across a swathe from Wigan to Grindleford, the only snag being that the train you get from Sheffield has to stop at Grindleford to use a Sheffield-Grindleford ticket to bridge the gap.