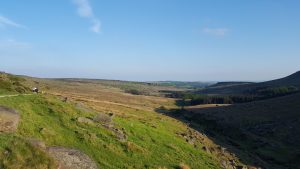 This page was originally written by, and is dedicated to Jos Kingston, who campaigned tirelessly for sustainable access to the Peak District before her death in February 2007. Also dedicated to the memory of Rob Brock, who died in March 2009

The meeting was held in Hathersage to focus specifically on the issue of cycle access to the Peak District. In addition to Pedal Pushers members, the meeting was attended by Alix Otten from Manchester CTC, and Rob Brock, Sustainable Transport Officer for the YHA.

The emphasis of  CycleSheffield differs from that of mountain bikers and racing cyclists in its focus on routes which are suitable for families and touring cyclists, offering a reasonably level surface whilst carrying minimal or no motor traffic.  Access to the Peak District for recreational cycling should not be dependent on travelling out by car; and the network of “joined-up” cycle routes, most especially in the parts of the Peak District closest to Sheffield, should be extended. It is evident from Derbyshire County Council’s “Cycle Derbyshire” map that these are distinctly lacking in the part of the Peak District closest to Sheffield.

With the opening of the Monsal Trail tunnels and the tremendous potential for additional sustainable tourist traffic that this represents, establishment of safe routes from Sheffield & Chesterfield to the trail, probably joining at Bakewell or the Country Bookstore, should be a priority.

Main routes suggested in this area are (from north to south):

This signed route into the Peak District from Sheffield is a big success but high speeds on Ringinglow Rd are a disincentive to new cyclists. There is no reason for traffic to travel at higher speeds on this road – most usage is for leisure purposes, the A6187/A625 being the main business route between the Hope Valley and Sheffield. One option would be to return this road to single track by fencing off one carriageway and making the other side available to walkers, cyclists and horse riders only.

Additionally in Sheffield, the route has been severed by a number of major works over the years:- Station Master plan, Winter Gardens, Barker’s Pool, Division Street, West One, Water Works at Bingham Park, Sevenstones. As at January 2021, however, the route is open in its entirety and has been improved by the closure of Division St, and the abolition of parking on Clarkehouse Rd. The time is ripe for a grand reopening of the route, linked to an upgrade to National Cycle Network status. All the stakeholders seemed keen to get this route on the map again and we think an updated reprint of the guide/ map and an official reopening ceremony would be a great success.

This could be linked in with our aspirations for a new Sheffield  – Manchester route (NCN6) combining the Peak Park anniversary route with back lanes in the Peak Park. (full route description here)

The establishment of a cycle route of this kind can be a driver for slower speeds and other road safety measures.

4. The Sheaf Valley route is also slowly taking place and will need to be linked in to other routes as they become available.

It appears that the National Trust is fearful that Longshaw could be overwhelmed by mountain bikes if cycling was permitted. However this would seem an unrealistic fear if cycling were permitted only on a limited number of designated tracks. The potential the Longshaw estate offers for the promotion and encouragement of recreation family cycling is tremendous. Mountain Biking has moved on from the early days and most MTB’ers are now aware of the need to stick to bridleways, give way to walkers etc.

(Update July 2014 – 2 trails through Longshaw are now open – House to Grouse and House to Wooden Pole. )

8. Greenwood Farm (Hathersage Booths) – Grindleford Station. Rights to cycle along this track are also high on the wish list of cyclists living in Hathersage/Grindleford.

A small section of this route is a track where rights of way would need negotiating.

The same principles which apply to Longshaw apply equally to Chatsworth estate – tremendous potential for promotion of cycling. In particular the legitimisation of the route from Park Lodge past the house would remove a major barrier to cycling, and mitigate part of the effect of the enormous amount of motor traffic that Chatsworth attracts.

1. All the above suggestions would benefit from greater detail, particularly where they involve redefining rights of way to permit cycling; or use of tracks where rights of way don’t currently exist. Best presentation would require larger-scale maps linking to smaller-scale maps with more detail.

2. A top priority is linking of routes to form a network.

3. Surfaces – signing which indicated suitability of surfaces for cycling would be beneficial. There are enormous differences between bridleway surfaces.

4. Additional routes: The track along the old railway line from Bamford – Ladybower has been integrated with the tracks and roads with restricted vehicle access round Ladybower/Derwent, and provides an excellent route for cyclists, which deserves to be well waymarked.

5. Another route which would lend itself to waymarking and special designation is New Mills – Hayfield – Chapel-en-le-Frith.

6. Although there are cycle lanes along parts of the main road through the Hope Valley, this is not pleasant cycling. Parents in the Hope Valley are concerned about the lack of safe cycleways for children attending Hope Valley College and are discussing plans in relation to this. Suggested that this should be separated lanes on each side of the road, so that cyclists can benefit from the “Tailwind” of traffic.

7. We are strongly against motorised vehicles in off-road contexts. This is counter to peaceful enjoyment of countryside and there are safety issues; environmental effects; rutting of surfaces etc. “Volunteer” resurfacing of routes by off-roaders might initially provide an improvement for cyclists, but this is likely to be short-lived where motorised off-road usage continues to expand.

Cycles and public transport into the Peak District

1. Hope Valley line – This is the main conduit for cyclists from Sheffield/Manchester but in theory only 2 bikes are permitted per train. Makes use of public transport for family or group cycle outings in the Peak District problematic. For individual cyclists too, uncertainty as to whether one will or won’t be able to board a train with a bike on a line where trains are mainly run on an hourly service, obviously isn’t satisfactory. Restrictions could easily be lessened, at any rate outside peak hours? Trains should have “bike” stickers on the outside so cyclists know where to load their bikes – this decreases dwell times at stations, thus improving punctuality.

Northern Rail has set up a Cycle Forum and Simon Geller is a member. This issue has been raised and a new cycle strategy states that guards can be ‘flexible’ over cycle carriage.  (Update October 2018 – The signage issue was resolved and the current signage will be/has been replicated on new and re-furbished trains.)

2. Possibility suggested of cyclists trains – on a similar model to folk trains? ACORP have suggested the use of defunct Pacers as bike vans, although CTC members may question whether the ride quality of these units is good enough to carry expensive touring bikes.

3. Steps at stations – need to carry bikes across can be a deterrent to cyclists who are less agile/family groups. Hope and Chinley are  examples.

4. Availability of bike buses on routes where this would be especially likely to prove popular. 240 Sheffield – Bakewell buses could carry bikes and link with Monsal Trail. 272 to Castleton would also seem to be suitable – tickets on this service are interchangeable with rail services but the buses don’t carry bikes. (Update Jan 2021 – Hulleys of Baslow say they will carry bike where possible) However, A better approach would be the American solution of bike racks fitted to the front of buses.

The Peak Cycle Shuttle Bus carries cycles on board, so it is quite limited in terms of numbers.  It is owned and operated by Bakewell & Eyam Community Transport and it can be booked directly through them. (Jan 2021 – Not sure whether this is still running)

For cyclists preferring to remain on the road, a key issue is speed of motor traffic. Policy with regards to speed limits has been inconsistent, with little or no ‘joined-up thinking’ between Derbyshire and Sheffield. We understand that this is changing. Derbyshire has consistently been bringing speeds down on its major roads.

Roads where we would like to see lower limits are:-

There’s an article about motorised off-roading in the Peakland Guardian, the magazine of the Friends of the Peak District (CycleSheffield is is a member)

It basically explains how the off-road lobby have been exploiting the law to claim they have a legitimate case for using bridleways where they were once used by carts. They have applied to Derbyshire CC to have them converted to Byways Open To All Traffic (BOATS) This is done on the basis of historical usage not the appropriacy of the route for motorised traffic. Once this occurs DCC or the Peak Park Authority can reverse the decision through a Traffic Regulation Order (TRO.) – which the off-roaders can object to. Attempts to introduce a voluntary practice, as on the Long Causeway, have failed. The Peak Park has a new off-road strategy – http://www.peakdistrict.org/

This is clearly a cause for concern and something we need to keep an eye on.

August 11 – Friends of the Peak District held a protest over off-roading on the Long Causeway and it appears that the Peak Park authority are taking notice.

The Peak District Green Lanes Alliance is campaigning against motorised access to Green Lanes and byways and was featured on “Tales from the National Parks” on BBC4. They seem  to be having some success  – see http://pdgla.org.uk/. Cyclesheffield has joined as a supporter.

We’re very pleased that, after 9 years running this campaign, people are starting to take notice.

(i) A TRO has been issued confirming the banning of Motor Traffic from the  Long Causeway, a byway between Sheffield (Redmires) and the Peak District via Stanage. It is hoped that this will make it a more pleasant environment for walkers, cyclists and horse riders, adhering to the principle of “Quiet Enjoyment” of the Park.

http://www.peakdistrict.gov.uk/looking-after/vehicles/restrictions
The Long Causeway can be part of excellent rides between Sheffield, Dore and Hathersage or Bamford stations.
Update April 2017
The following byways have been closed to motor traffic.
(ii) Public consultation is currently taking place on the proposal to extend the Monsal Trail from Bakewell to Matlock.  The off-road trail will involve using the existing tunnel behind Haddon Hall and new bridges being built, plus a section of new cycleway running alongside Peak Rail.  The funds are available and this is a one-off opportunity to complete a key section of the White Peak Loop, a long circular cycle route through the Peak District.

This would be a major boost for tourism in the Peak District and you are invited to give your opinion via an online survey (before 15th September) at:

The new route will enable people to access the Peak District via an off-road route directly from Matlock Station avoiding the A6 – currently many people drive further into the Peak before off-loading their bikes and setting off.

The Greater Peak District Cycle Strategy is out for consultation and available here.

Burbage to Fox House (The old carriage road – 5. above) This track was originally so that Queen Victoria could see the Peak District from the comfort of her carriage when she visited the North of England. However, she never used it. The track has been recently resurfaced and converted to permissive brldleway status so can be used by most cyclists with care.