Should you wish to try something a bit different, try a visit to Western Manchester. A warning that there is a lot of development going on in West Manchester, so expect diversions.

The area is redolent with history – you have the Bridgewater Canal, the first canal in the world to carry freight, and the Manchester – Liverpool railway, the first passenger railway in the world. You also pass by Manchester’s 1st Airport at Barton in Salford.

Chat Moss is a massive peat bog, now being “returned to nature” by the local Wildlife Trust after peat extraction has been halted. You will  also pass through Salford Quays, passing the Lowry and MediaCityUK.

You may have read about the remarkable regeneration of Irlam due to investment from a local entrepreneur in the Guardian.

The ride is about 35 flat miles and you should  aim to take all day over it. To visit everything you pass by , however, you might want to take a couple of days!

Starting from Piccadilly, cross over the footbridge to the left from the concourse, past the Brompton Dock (out of use I think) head for the canal and follow it down to Castlefield. (use Canal St and don’t be put off by the No Entry signs – they are just there to keep motor vhices out) You are passing by the Gar Village and Chinatown. In Castlefield, just past Deansgate Station go left into the canal basin and get onto the Bridgewater canal heading west – after a cobbled bit and a couple of bridges it’s a straight shot. At Throstle Nest Bridge you cross over the canal and a mile or so later take the right fork, continue on this for a few miles – at the Swing Aqueduct (the only such structure in the world!) you need to cross on the adjacent swing road bridge – past the lighthouse (every canal should have one) until you come to Worsley. This was the site of the Earl of Bridgewater’s collieries which led him to build the canal, the first one of the Industrial Revolution. 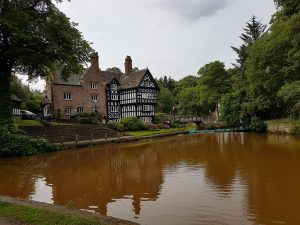 An RHS Site opened in Bridgewater in 2021 with a new greenway connection being developed. At the moment getting there by bike involves crossing some convoluted motorway junctions.

Leave the towpath at the Bridgewater Hotel and take Farm Lane, accessing the Port Salford Greenway.  This area has a network of cycle routes on the Dutch model rather than a simple A to B route so follow the signs for Port Salford or Irlam & Cadishead. You leave the Greenway at the junction of the A57 & M60 – some pavement cycling is required here – and head west on the A57 which has an off-road cycle path. Continue past Manchester City Airport – who knew Manchester had two airports?  – on the A57, past Barton Moss and take the Irlam bypass to continue on the cycle route (go round the petrol station, where there is also one of only two Greggs drive-throughs in the UK, so you can stop for a cycle-through Vegan sausage roll if you want) Note you are passing Irlam locks, massive locks on the Ship Canal that can take ocean-going vessels, so take a look. 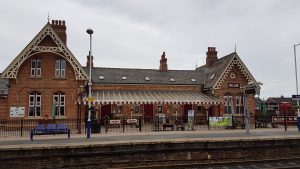 Ignore the first cycle route sign that says Irlam and take Excalibur Way which will bring you out close to Irlam station. Break for refreshments here. After you have refuelled, leave the station on the south-west side. Although there is a path through the housing estate, it’s a bit convoluted, so for ease of passage I recommend going down to R. New Moss Rd although you are welcome to explore. The north end of New Moss Rd, which is badly potholed, peters out into a track – keep going and you will emerge onto Woolden Moss nature reserve. After your visit to the reserve head east until you get to Larkhill Farm (you can’t miss it) 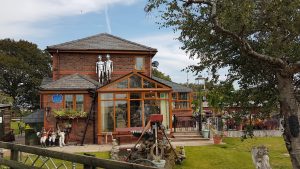 Then head north on Astley Rd, and just before the point that you reach a No Through Road sign turn r. east then l. north on Rindle Rd. This takes you across the Liverpool – Manchester railway, the first passenger railway in the world and still in very regular use. George Stephenson solved the problem of crossing the Bog, which would not have been as well drained as it is today, by laying birch branches and sheep skins as a raft across the peat. This is still what supports the railway today and this afforestation is of course what gave Birchwood, not far away, its name.

Continue up Rindle Rd and Lower Green Lane cross the canal and the  A580, turn go across to Coach Rd and then right on the A5082 Church Rd. This road is a bit busy and uphill  and is the least satisfactory part of the ride. However, it gets you up to the Leigh – Manchester guided busway, which has a cycle track alongside, although the path has yet to bed down. This takes you straight onto NCN55, a lovely route that brings you out in the leafy parts of Eccles. You are not far from the lighthouse that you passed on your way out at this point.

Keep following 55 and it will bring you to Eccles town centre. You will find yourself facing the M602 motorway, with a bridge over it that leads to the station.  Here you can get a train back to Manchester, but there is only one an hour currently, or if you are on a Brompton/folder you can take a tram.

To cycle back into Manchester via Salford Quays, turn left before crossing the footbridge on Wellington Rd, go under the dual carriageway ahead then take the cycle lanes across the M602  to head south on the A576. On reaching Coronet Way, near the lifting bridge which goes over the Ship Canal, turn left and continue on cycle lanes along Pacific Way and Broadway which will bring you to the Quays. Make your own way past the Quays with various attractions including Media City and the Lowry. Cross over the busy A 5063 Trafford Road to reach Ordsall Lane (A5066) passing Grade 1 listed Ordsall Hall on your left. Turn right down a path to the bank of the Ship Canal and follow it as it becomes the River Irwell and reaches the city centre. (This is Manchester’s Graffiti Central) Here you are close to the Museum of Science and Industry and go under one of the few significant pieces of railway infrastructure to be built in the North for many years, the Ordsall Chord.

The riverside path eventually stops at Trinity Way (although it will soon penetrate further into the city) and you then take the footpath along this road to reach Salford Central station. Cross the A34 at the traffic lights and go straight ahead onto a new walkway adjacent to a car park entrance and reach the river again near a new curved footbridge. This takes you into the new Spinningfields development. Continue ahead, mainly through traffic free avenues to reach the A56 Deansgate. It’s now a short hop to Albert Square and an easy but busy few blocks back to Piccadilly.

Here’s the inspiration for the ride title – is Manchester the new L.A.?
(aka the show ain’t over till the fat man sings)

The BBC2 Series, Manctopia, offers some insights into the property boom in Manchester