From Sheffield trains head north through Meadowhall, and then go either north-east to Doncaster for the East Coast Main Line and further East to Hull and Cleethorpes, or North West to Barnsley and hence either Huddersfield or Leeds, or straight up to Leeds with some trains heading to York and further north.

Heading Calder Valley Way?  Have a look at travelling via Wakefield Kirkgate and Brighouse or Mirfield. You can avoid the hassle of changing at Leeds if you get the right connections and you can switch to the excellent Kirklees Greenway network to complete your journey.

When I tried it both the revenue protection guys and the cafe staff offered to look after my bike at Kirkgate while I had a coffee – top service!

xx:11     Cleethorpes via Doncaster Trans-Pennine Express.  Generally very busy 6-Car trains, 4 bikes per train, you must reserve up to 10 minutes in advance.  The bike spaces are in the centre of each unit – look for the flexible space next to the disabled toilet, there should be a bike symbol by the door as well.

xx:15     Leeds   Via Bolton-on-Dearne, quite slow. 2 Bikes per train but can be flexible at off-peak times.

xx:18     Leeds via Barnsley Northern “Express” service only calling at Meadowhall, Barnsley and Wakefield Kirkgate. 2 Bikes per train non-reservable but can be flexible at off-peak times.

On Sundays, the 10:17 is a through service to Carlisle, returning at 15:02 – handy if you want to head up to the Dales and try out some of those Tour De France stages, but it doesn’t stop at all stations on the Settle-Carlisle. On other days you need to change at Leeds for the Settle – Carlisle line. Trains on this line can be overcrowded especially on Summer Saturdays.

xx:21     Cross-Country Train via Leeds, destinations vary but they all serve York & Newcastle. Generally very busy. On Voyager trains 3 Bike spaces, 1 first come first served, 2 reservable, (generally not enforced)  in the second coach from the end in the second class section. You need to be able to lift your bike and hang it on a hook.   Some services are operated by the older HST’s, these trains have a guard’s compartment in the end of the coach next to  the power unit in 2nd class with room for at least 4 bikes. Also many Voyager services are now doubled up, so room for 6 bikes.

xx:32 Doncaster. Northern stopping train, 2 Bikes per train non-reservable but can be flexible at off-peak times

xx:35     Huddersfield  via Barnsley. Northern stopping train, 2 Bikes per train non-reservable but can be flexible at off-peak times   Note that it can be just as quick to take a Northern express to Wakefield Kirkgate and change.

xx:57     Scarborough via Bridlington & Hull.  Northern semi-fast train, usually operated by spacious 3-car Class 170 units. 2 Bikes per train non-reservable but can be flexible at off-peak times. also calls at Beverley and Bempton for the fabulous RSPB reserve on the cliffs – a Puffin nesting place. Note this service can get very full of bikes from Bridlington because of the large number of cyclists completing the Way of the Roses.

Bike space on a Northern Class 170

If you are changing  trains at Doncaster you might be getting one of the new LNER Azuma trains. Bike reservations are essential on these trains and  there are bike spaces between Standard Class and First Class (there may be others). You have to be able to hang up your bike or ask LNER staff who I have found to be always very helpful if you make yourself known to them.

Grand Central run from Donnie to Kings Cross non-stop a few times a day and carry bikes without reservations – connection times from Sheffield are shown here.  ( 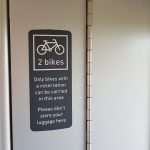 Bike locker on an Azuma