By Richard Attwood with updates from Simon Geller

Why train assist/Langley Mill? – Well its a fast (35mins, no need to book Northern Rail) single train journey shot to get out of Sheffield and past the otherwise time consuming 30 – 40 mile cycle route options (Fast roads or Five Pits and Silverhill Trails) to get this far on the way south. You could also go to the new Ilkeston station which is close to Nutbrook Trail/Erewash canal.

Mapping: To both plan the ride and during it for broad directions I used:

(Plus resorted to Google map/location a couple of times.)

Mileage: approx 55 total. 8 miles or so less if you finish the ride at Loughborough.

Ride time: approx 6.5 hrs in the saddle, then add time for any cafe/history board/view stops. An hour or so less if finish at Loughborough.

Don’t Miss: The Bennerley Viaduct, opened to walkers and cyclists on January 13th 2022. The cycle ramp at the Easter end wasn’t in place as of Jan 14th 2022, however. 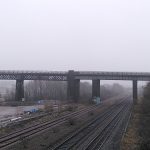 Summary: Grab an hourly service (eg 09.05) from Sheffield to Langley Mill (35 mins) to get yourself in to the Midlands.

With hindsight, I’d suggest trying the Cyclestreets route recommendation to turn L out of the station and then R onto Milnhay Rd etc to get onto R67/Nutbrook trail a little way down from the start. (See first Cyclestreets link above) – so possibly avoiding the big climb I ended up doing from the station up into Heanor centre to make my way to the very start of Nutbrook trail at Thorpes Road/Slack lane)

Cycle a delightful 8 miles or so along the signed trail, passing (or not) the sweet looking Nutbrook cafe,down to join the Erewash canal. The last mile is through an industrial park built around the remains of the massive Stanton Iron works.

Turn S down the canal to Sandiacre, noting the amazing Springfield Mill alongside the towpath.

CHOICE here – I turned R over the bridge at Sandiacre lock to get on to the towpath of the filled in Derby canal as a short cut over to join R6 to Derby – you could just carry on S on the towpath to join R6 at its junction with you on R67 a little further down at Long Eaton, maybe then calling at the West perk cafe in West park! 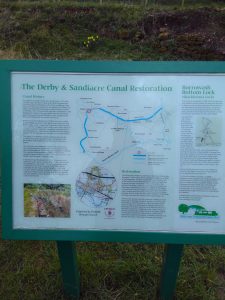 Bit of road work to get under the M1 on Longmoor road and Longmoor lane, then join R6 to Derby using the old towpath/cycle-laned roads and the River Derwent path. (I ignored the possible R66 short cut route across to R6 south off the riverside path at Alvaston a few miles before Derby.)

Couple of miles before Derby the riverside path passes Alvaston Park – call in at the Waterside cafe.

Then at the end of the park take an R6 signed left off the riverside path to join the old Derby canal route again a little further on at the delightful looking Navigation Inn.

Down to Worthington and round the enormous Cloud Hill quarry, where you will stumble across the slightly scary Cloud Cuckoos….. 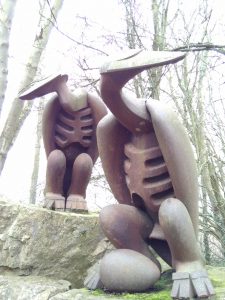 Now follow R6 across lovely rolling midland countryside to Loughborough. CHOICE here to train back to Sheffield from Loughborough (through trains at 20mins to the hour, so you could confidently book cycle space on the 3 or 4.40, or take a chance.)

Or carry on R6 down through quaint Quorn etc to Leicester station, taking the option to continue into town on the Great Central Way route when R6 crosses the A6 Loughborough road, and following the cycle route R off the A6 on to Greengate lane/Poplar ave/Elmfield ave/Fielding rd/Park rd, down the path alongside the railway and on past the GCR Leicester North station and in to Leicester. NOTE – I only went as far as this station, the Southern terminus of the fab Great Central Heritage Railway where I got a lift home from a passing wife, so I haven’t tried the last 3 miles or so into Leicester station proper but it looks straightforward. (Through trains back to Sheffield at half past the hour). (You can also take the route via Watermead Country Park – gets you onto the cyclepath alongside the River Soar)

From Leicester you can continue South along NCN6, East on NCN63 towards Oakham, or West on our Richard III Route towards Birmingham.