My pal, occasional contributor and soon-to-be co-editor for this site cycles down from Sheffield to see his father in Somerset once a year and this time I joined him for part of the ride. This was also an opportunity to try out my Garmin Edge for real navigating and see how it performed in comparison to paper and Google maps.

The train from Sheffield to Worcester was all good. Foregate St is the best station  to get to the Mill House campsite. There are no cycle facilities on A38 and a very poor footpath on the A449, all of which stops people on campsite from cycling into Worcester to spend money. Lovely campsite though.

We bumped our way into town and picked up the very good route along the river. The route from Worcester to Malvern is either half finished or we missed something but coffee in Malvern perked us up and some stiff climbing followed before  descending to Ledbury, a lovely town. This was the moment when R. decided to buy a new e-bike, as you do.

With more climbing and some excellent minor roads we made our way towards Gloucester.There’s a diversion after the Bridge at Maismore that could have been a lot better, broken glass and debris alongside the main road. Getting back on the route, decent enough, gets you in to spectacular Gloucester docks. Good pint at the Dick Whittington with live music outside.

Our first try at using the Garmin got us most of the way to the cider orchard where we were staying but with an inexplicable order to turn left near the end when the destination was clearly to the right.

Our lodgings for the night were in a yurt with a stove, electrickery, composting toilets- luxury! So good we slept in & didn’t get on  the road till after 10.

Sunday, we’d decided to compare Garmin navigation with the route Richard had planned and it has to be said they didn’t agree very often! Every time they did, the cry of “Verona”! went up – those who have seen the Handlebards version of taming of the shrew will understand.

Our route took us down to Stonehouse where we picked up NCN45 (?)  not very clearly marked or maintained (vegetation & surfaces) at first, got better as we passed Stroud  (stop at Sainsburys for provisions/ coffee.The rail trilogy continued and spat us out in gorgeous countryside, taking us towards Tetbury  (big Hill but worth it for the  run along the high ground) & Malmesbury  (lunch stop at the abbey).

Wanting to make up time we stuck to more major roads for a while which were fine. Entering Wiltshire we seemed to have an interminable grind uphill with a headwind – not steep but hard! Also it seemed the harder it got the more cries of Verona! were heard.   Crossing the GWR and the M4 we reached  Biddeston where our paths diverged –  Richard heading for Bradford on Avon, me for Bristol. I’d decided to rely on the Garmin to get me into the city, or at least as far as the B2B. Although there was a signed route close to where I started, the G. decided instead to take me up a long hill on the main road then veering off to cross a steep valley and into a village where I had to get off and walk it – the only time on this trip. All I can say is that Mr. Ga. wasn’t doing the pedalling,  Mr. Ge. was!

Soon after that we were back on the bike route (17) which was not without its challenges. A long climb running parallel to M4 – not right by it thankfully – had me dehydrated and I stopped at Tollcross  (?) for a pint of Orange Squash & water bottle refill. Soon after the downhill started – the G. keeping me on the more major road down a lovely but steep wooded valley – and at Mangotsfield the effort that has been put into making Bristol more cycle-friendly started to show with an off-road path leading into the B2B – all good quality, some extra signage needed at (?) roundabout though. Mr. G. was protesting strongly at this point, desperate to keep me on road.  I preferred to join the stream of cyclists coming into the city on the railway path, all ages and abilities, some with camping gear, looking like they were coming back from a great weekend or day out.

Entering the city centre, my navigational aids started to come unstuck. Mr. Garmin didn’t know which Premier I wanted while Ms Google kept trying to take me through the most packed touristic bits of the city. The only way I could get a sensible route was  by telling  Google I was driving! By the way I do think the Garmin has some masculine properties – taking the macho approach to staying on the road – while Google has some female ones, apart from having a female voice, tending to go off down narrow alleyways and pedestrianised areas which while car-free aren’t very conducive to cycling – at the risk of sounding sexist, often having good shopping opportunities though! The Garmin doesn’t seem to understand urban off-road routes very well.

I fucking love Bristol. It’s a progressive, multicultural inclusive city. Sure there are still problems with the road system and it lacks a metro or tram network  – a new bus system is being put in- let’s hope that takes some of the traffic out of the centre as a place to wander around have a drink and something to eat it’s great. I imbibed at the Highbury Vaults that I used to drink in about 1978 – they’ve moved it across the road from what I remember, it’s Youngs instead of Wadworth, but still a great pint – and took craft beer & pizza for tea at Beerdz. 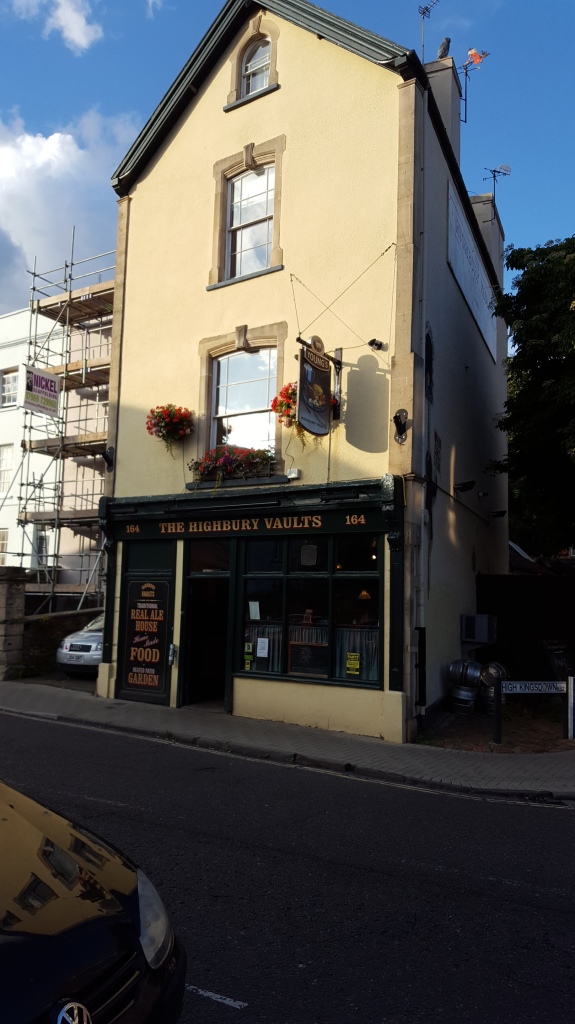 A great couple of day’s riding.